The Gloves Are Off...

February 27, 2007
So, the discussions between Virgin Media and Sky over carriage of some of the satellite company's channels on the cable company's service have, not surprisingly, broken down.

I have predicted for some time that the current ecosystem will go through a violent phase as it evolves into the next generation of services. 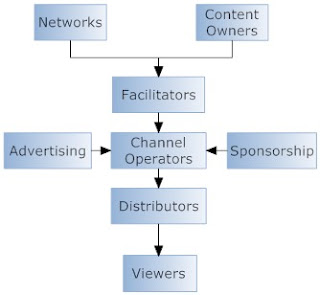 The relationship between the various players involved in the traditional TV marketplace and the evolving TV over IP marketplace are becoming complex, especially as companies vertically integrated.

For example, BT, formerly a network operator, is now aiming to be a content owner, a facilitator, a channel operator and a distributor. Verizon in the US is attempting a similar trick, as is AT&T.

The facilitators are companies such as Narrowstep, but some facilitators such as Roo and Brightcove are also aiming to be channel operators (or 'super EPG' operators) as well as distributors.

The viewer will benefit from choice in all of this, but will have to put up with disparate services that will gradually consolidate.

This is a significant marketplace, probably worth $120 - 150 billion a year between advertising, pay-per-view, subscription and other revenue streams, so there's undoubtedly room for many players, but it's going to be a bloody battle for supremacy over the coming couple of years peppered by alliances and bust-ups.
internet tv tv marketplace video advertising video content owners