March 05, 2007
Google have announced that they are going to concentrate on the narrowcast space after facing rejection from the major studios in trying to lure them onto YouTube. The dynamics of the market are pretty clear. 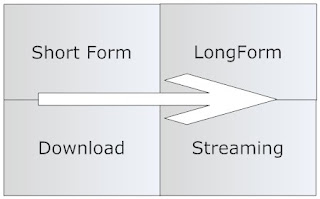 Short form is becoming long form, and, as the advertising model kicks in, the pay-per-view download model will give way (but not be usurped by) to the advertising model.
Quality has hardly been a consideration in the user generated model to date, but with Google already admitting that they cannot cope with the bandwidth requirements of delivering mainstream media over IP, it seems that they've woken up to the business model developed by Narrowstep five years ago - narrowcast channels deliver valuable audiences for lower bandwidth costs.
But Google are having to turn around a supertanker and Revver already have a much better narrowcast model.
Also, as the market matures, more and more content owners are realising that they can make more money by either syndicating or controlling their own distribution (or both).
Maturing the YouTube model into a revenue stream is going to be more difficult than Google thought, I suspect.
long form narrowcast revver youtube