I Started So I'm Finished

April 15, 2007
Those of you who know me will know that I started Narrowstep when I was unable to watch a Wales v Ireland rugby game when visiting the San Francisco office of my previous company (it's a longer and funnier story, but I'll get back to that in some future post).

It seemed crazy to me that there's all this content on TV, but that it's not available in so many places and devices.

So, this weekend was seminal - I actually paid for an online content service since the content wasn't available anywhere else. 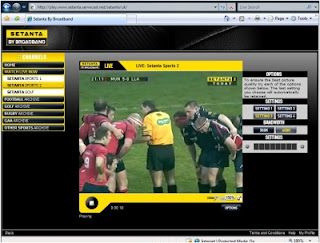 It was with Setanta's Servecast service and the results were poor.


Connection was manually - you had to select between 300 Kbps and 600 Kbps and then had to constantly switch between four provided streaming servers - all of which buffered badly after five minutes or so and wouldn't come back.

On a connection that I tried over and again on a separate machine (including a 1.8Mbps Narrowstep stream), this was a poor performance (although somewhat better than the pathetic BBC streaming service).


I do find it astounding after all of this time that the commercial services out there are so poor. Certainly, Narrowstep is on another level when providing live events, as are some other providers such as AOL.