January 12, 2008
I'm working with a number of clients who are launching new TV channels and it surprises me how many have plans for traditional broadcast stations.

Running an internet TV station isn't cheap - doing it properly with a good content strategy can cost $100k a month.

But going the traditional route adds to this. Even with a single backend platform (which doesn't really exist), the additional cost will be around $500k for satellite playout (depending on footprint and region) and half as much again as EPG/carrier costs.

But the reality is that being even buried away on a mainstream EPG such as Sky's guarantees some level of 'discovery' and therefore demands less marketing effort and expense. There is also the advantage that there is no incremental cost of delivery for broadcast delivery, whereas internet delivered content (unless multicast) has an incremental cost. 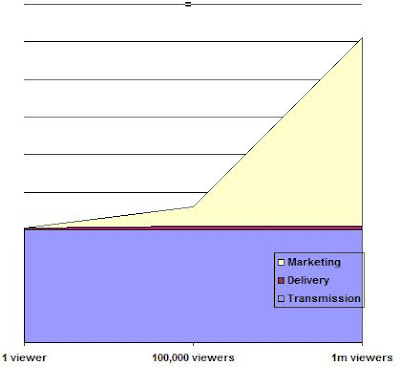 So, what is saved in transmission costs has to be spent on 'discovery' (with Google inevitably benefiting) and on bandwidth charges.

But crunching the figures shows that the broadcast option rarely makes sense initially unless the channel backers have very deep pockets. Indeed, I'm beginning to question whether an investment in traditional broadcast is worthwhile now as we stand on the verge of the introduction of a slew of new technologies that will make distribution easier and more ubiquitous than ever.

This said, there are some real advantages to going the broadcast route. First of all it engenders professionalism - a TV channel is voracious in its content requirements and it's easy to stick a few dodgy videos on a server and claim to be running an 'internet TV' station. Secondly, it brings automatic distribution. Thirdly, it means, rightly or wrongly, you're looked at more seriously by investors and advertisers alike.

So, there probably are channels that should look to the broadcast model. Real Estate TV in the UK comes to mind as an organisation that has successfully started to bridge the broadcast/narrowcast divide and my former co-Director, Roger Werner, who was the man behind ESPN, the Speed Channel and the Outdoor Channel is now working again in the broadcast/narrowcast space, indicating that he believes that there is still great value in a multi-distribution approach.
broadcast 360 narrowcast real estate tv transmission