March 17, 2008
YouTube is totally dominant in the US video serving market according to the latest stats from comScore. However, overall number of views are slightly down from December to January. Other findings include:
Over three-quarters of US internet users (75.7 percent) viewed online video.
78.5 million viewers watched 3.25 billion videos on YouTube.com (a staggering 41.4 videos per viewer).
Meanwhile, 49.4 million viewers watched 534 million videos on MySpace.com (10.8 videos per viewer).
The average online video duration was 2.9 minutes - so short form still rules.
The average online video viewer consumed 70 videos - at an average 3 mins that's still only three and a half hours a week per viewer.

Here are the totals: 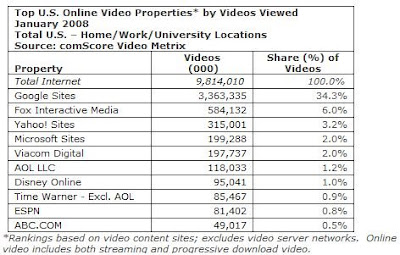 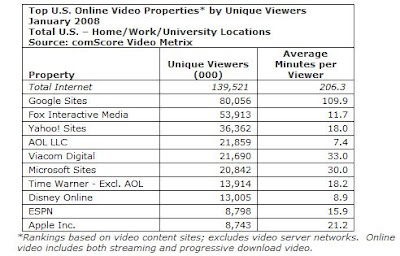