June 23, 2009
Google has entered the upfront traditional TV booking market and last month hosted a major event in its NYC office for advertisers and their agencies.
The TV upfront market is pre-booking ad slots for the coming year; the booking happens in Spring and the bookings start the following September. The majority of TV ad slots have traditionally been sold in this window.
What's interesting here is that it seems anyone can use Google's Adwords service to book a traditional TV campaign. The service also covers YouTube, and shows how entrenched traditional TV is - Google have had to go back to TV1.0 before they can tackle TV2.0. 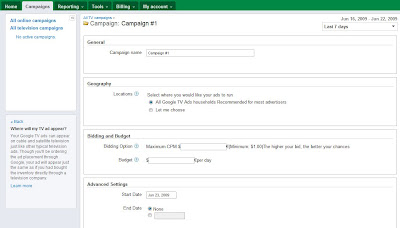 The system has reportedly booked some seven figure campaigns, and is clearly best suited to spot bookings, perhaps best of all for clearing left-over inventory (which would not have been an issue pre-recession).
Google's inability to translate its Adwords model to other media has confounded me, but now they seem to be making progress on mobile, on feeds and now on TV, despite dropping their equivalent publishing model (or perhaps withdrawing it for now ?).
The ability to book long tail audiences across media, including search, text ads, display ads, blog and news feeds as well as traditional media seem a very powerful proposition.
advertising google upfront tv market youtube