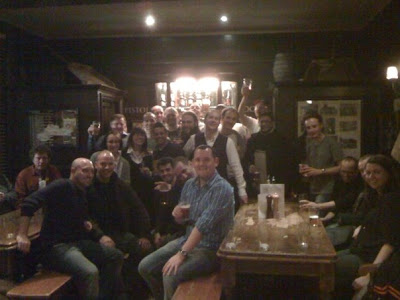 It was great to catch up with the team who helped build Narrowstep last night for a reunion; by now we're scattered to the four winds with Brightcove, Level 3, KIT Digital, Autonomy and, of course, TV Everywhere, all represented. More edifying for me is to see many of the former employees going out and starting their own companies and initiatives. The talent that we had at Narrowstep makes its demise even more galling.
The old studio and offices in Parsons Green Lane have become trendy flats and a supermarket, telvOS, an internet TV platform before its time, is being shelved and the bitterness at the damaged wreaked on the company by David McCourt and his team of amateur managers still hasn't ebbed.
But the knowledge, experience and friendship we built over the decade will stand us all well for the future. Perhaps we were just a little bit early to the party, but as the picture above shows, we're making up for it now!
narrowstep nrws