April 19, 2011
Standing here, in 2011, you can watch the changing of the guard.
Seeing companies like HMV and Blockbuster die slow deaths because they failed to innovate or change fast enough is salutary for anyone involved in business, and today's vultures are tomorrow's carrion, as Dish Networks (new owners of the once mighty Blockbuster) themselves might find.
It is staggering how fast the mighty can fall, but more depressing is how difficult it is for new companies to break through. The long tail for media in the UK is more of a collapsed L, lying on its side,with a few huge companies and lots and lots of very small ones.
In the UK I struggle to think of a major new media company that has been established in the past twenty years (if you discount mergers and roll ups). The competition is such that as soon as a company is perceived to have any value it is picked up by a larger competitor, or worse still, is competed out of the market.
In the US you can watch the ebb and flow of business, in the UK we have no value or strength. Our largest indigenous media companies such as ITV and Reed Elsevier (OK, half Dutch), Pearson and DMGT are all struggling on an international stage.
Major British media companies are now most likely to be bought by US businesses - see Shed (Warners) and LoveFilm (Amazon).
This list is horribly out of date, but makes a point about British media ownership - the stats are from 2009, but the ownership column is current (ad agencies were taken out hence the gaps): 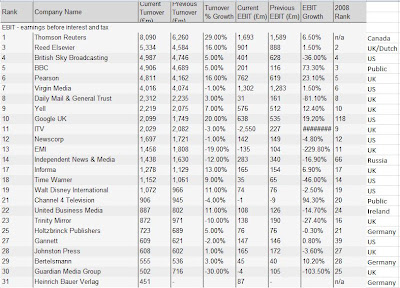