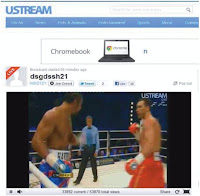 Back in 1998/99 when IP TV was being first mooted, ADSL was likely to be mistaken for an embarrasing infection and there were fewer grey "badger effect" hairs about content was all about control of distribution. "Walled gardens" were the thing and control of the EPG was paramount. Enough of the history.

Today, as Iolo points out the beginning of direct delivery of web services (including live video) to the TV via standard web browsers linked to 2mbps or greater broadband has killed all that and opened a tremendous new market up. The attached screen grab shows over 50,000 live viewers on U stream for a recent boxing fixture supported by Google advertising. As my less politically correct friends point out the consumer has gone off the reservation. Rights exclusivity has been undermined and the previous high barriers to entry in the distribution (and marketing) of video content to consumers worldwide almost totally removed.
ustream