December 01, 2011
When a goliath like YouTube makes a major announcement, I begin to quake. YouTube has single handedly destroyed the video space through its combination of piracy, useless content and sheer weight (read Google money).

So, a new launch based around channels ? Surely this was the vision I had in the late ninties that led to Narrowstep and the belief that narrowcast channels could become the publishing industry for the 21st century. But the monster that is Google swept in, picked up a third rate UGC site and destroyed models from local TV to narrowcast sports channels across the world. Now, apparently, they want to re-instigate this vision in their own light.

So, it was with apprehension that I reloaded YouTube (which, frankly, I never use, not for ideological reasons, but because it seems to carry very little of interest to me beyond the odd pop video from 1979). And there it was: 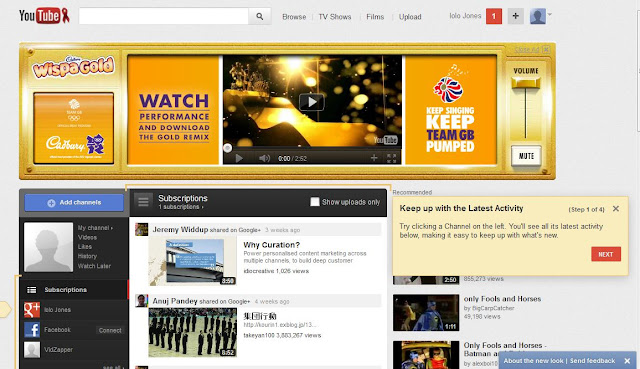 Jeez, what a mess. Actually, what an ad! So, a site that is aiming to usurp broadcasters depends on massive placement ads to commercialise itself. ALOL.

The rest of the interface follows the dreadful 'social' trend where 'discovery' has become the prerogative, but based on people, not content.

Trending, Popular, Subscriptions. I suspect that there is a party going on at Comcast and BSkyB just now as they realise how botched this is.

Promoting 'curation' but building a UX around social is just a dichotomy. Planet YouTube is a very, very confused place.

Even more barking is this:

YouTube is a mess..... Thankfully for those of us working towards a decent narrowcast world.
bad channels interface mess narrowcast new youtube