And The Winner Is...

March 28, 2012
I've spent the past three months mentoring for a schools business competition called the Next Big Thing. I've often done the same for real businesses, startups and even college students, but inner city schools bring their own particular challenges.

As it happens, Haverstock, the school in Chalk Farm, between Camden and Hampstead and Primrose Hill, where I was mentoring is where my colleague in arms for many of my previous companies, Jason Jack, went to high school (and was also the alma mater of our current leader of the opposition and his elder brother). In more recent times it has had a more challenging time with a large cohort of students from all over the world now making up the student numbers.

I was set in charge of Edgar, and an ever revolving team of other students, none of whom seemed to be able to commit for various reasons. Other teams were made up of three or four members and had a bit more stability and range.

Nevertheless, Edgar, who comes from Angola and has English as very much a second languages (more so than your Welsh correspondent penning this piece) managed to come up with a fabulous idea that has struck a chord with everyone who has encountered it since.

Moreover, in these straightened times, it was an idea that could get off the ground with no investment or expenditure, and had the capability of becoming an international business.

Cheaper Abroad was simply a way of taking what Edgar naturally does - researching cheaper deals for clothes and luxury brands online, and then buying online from overseas.

We discussed actually buying these goods and selling them, but this would involve the costs of inventory and storage, tax and shipping implications and would require capital, so this was discounted in favour of a much simpler model - a website that would point towards overseas bargains, show the discounts against UK online or UK retail prices and also show the sizes converted to UK sizes.

A prototype was used on free hosting using WordPress and Google Adsense was added.

By the time of the competition, the website had cost nothing and generated £20 of revenue from ads. Next were the addition of directory listings and affiliate schemes and beginning to publicise the site online, using friends, emails, Facebook and Twitter.

This all seemed to strike a chord with a panel of judges, made up of experienced business people, journalists, entrepreneurs and investors.

The result can be seen below: 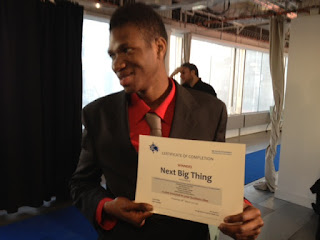 And there's something for even the multimillion pound fundraises I get involved in to learn from this.

1) Keep it simple -  a business shouldn't be complicated: if no on understands it they won't invest
2) Tell a story - the story in this case was a personal one about Edgar's experience in looking for cheaper luxury goods
3) Figure out the business model - the likes of Compare The Market and Moneysupermarket are getting on for billion pound business, and this idea shares the same business model, albeit in a different sector.
4) Presentation - all the presentations were fabulous, indeed many were better than presentations from seasoned businesspeople, but we added a few twists - Edgar introduced the piece with his own dance and rap and we then presented the idea with a voiceover recorded by our wonderful RADA mentor, Zoe. The story told itself. Use the tools available to you...
5) Make money - today, when I come across a startup asking for £5m or even £500k I laugh. It's an impossible model. You need to take scraps and build a palace and then ask for money: it's the only show in town.

Yes, you can come up with a great idea, yes you can do great market research, but all investors care about, really, is execution, whether you're asking for £1k or £10m, making money talks, ideas walk.