February 13, 2014
There used to be an FCC mandated law in the US that no media company could own more than 25% market share. Today's announcement that Comcast is acquiring Time Warner Cable is the most visible result yet of the change in regulation that took that figure to 45%.

After only recently ingesting content giant NBCU, Comcast is on a roll, but the map below show that they may face a tough time with regulators: 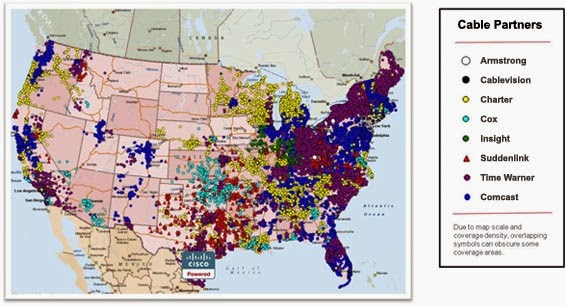 The dark blue and purple represent the soon-to-be-merged entity.

The deal is likely to create a $200bn giant, so you've got to question if relaxing those monopoly rules was a wise move.

The argument went that there were new players entering the market and the old rules no longer played fair. Indeed, players like Verizon, AT&T, YouTube, Hulu and Netflix have seemed to be re-writing the rules.

Meanwhile, in Europe, Liberty Media is steadily gobbling up cable operations all over the continent and now has a massive footprint, but their DirecTV business in North America is now firmly in number two slot in the paid television segment (although making up the figures for the mega merger so that regulation is less of a concern).

Still, you've got to ask where the value is, when Netflix invests $3bn in content and Comcast invests $45bn in Time Warner Cable.

The most successful media companies have always been highly vertically integrated, controlling their content production and their audience. This hasn't chaged, the only question now is how virtual can you make this relationship or do the old infrastructure player have a long life in them yet ?