BBC Suffers A Death Of A Thousand Cuts 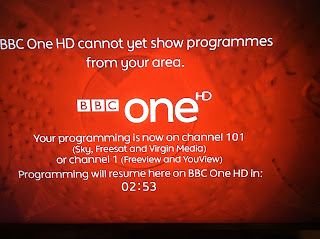 The BBC is probably the most admired broadcasting organisation in the world. When your budget is equivalent to that of all your main commercial rivals and paid for by a Royal Charter based on minimal accountability, perhaps you can understand how this unique institution evolved.
The world's biggest aspidistra (look it up) exists to inform, educate and entertain, a mandate it has had for nearly a century now.
But of late is has been deaf and stupid, totally ignoring what was going on in the world around it.
Let me provide some evidence of this:
It runs many TV channels that only operate a for a few hours a day such as BBC3, BBC4 and CeeBeebies. What is the point ?
After nearly a decade it is incapable of broadcasting a 24 x 7 HD channel: its local broadcasting laughably falls back to a test card.
It has an enormous bureaucracy and even commissions programmes lampooning its own bureaucracy, such as W1A. This is not self-deprecation, it's a sign of an organisation totally out of control.
It has become a major real estate developer with the building of billion pound projects in Manchester and central London.
Programming has become weak. ITV and Scandinavian broadcasters have stolen the show in drama.
Meanwhile, the Conservative Party has won a majority in the UK Parliament and they love to hate the BBC with a passion. (Despite the fact that the BBC's Political Editor was the ex-leader of the Conservative Union at Oxford University they think that the organization is a left wing hive.)
So, there has been a gradual and insidious attack on the BBC's finances.
First of all, the BBC was made to pay for a range of new local TV stations along with Welsh language channel S4C.
Next came a freezing of its licence fee.
Then a proposal to decriminalise non payment of the licence at a time when many people were 'cord cutting'.
Finally, a proposal for the BBC to pay for the cost of licences for over 75 year olds (some would argue its main demographic these days) is on the table.
And in the background is the renewal of its Royal Charter.
The BBC is funded by a tax of around £145 on every UK household that watches live TV. That amounts to £3.26 billion (yes, billion...). It also gets £245 million from the government to run the World Service. On top of this it makes just over a billion selling programmes internationally and collecting licences.
This results in a revenue twice the size of the UK's biggest commercial broadcaster, ITV.
The company directly employs over 20,000 people to run four full time and four part time TV stations, around six national radio stations, an online video and audio player and a network of local and national stations that you cannot watch on HD, but can listen to on DAB. Commercial rivals operate on this scale with a fraction of the budget: I estimate that a commercial organisation would employ around a third of this number of employees to run this type of service.
The iPlayer has been a great success, but I will happily offer to run it for one tenth of the current budget with better performance and more features. Like most broadcasters, the BBC keeps on developing its own technology where far cheaper off the shelf solutions exist.
So, that's the situation. The trouble is that everyone at the BBC wants to preserve a status quo in the era of Big Internet - Google, Facebook, Twitter, YouTube, Hulu, Netflix. There are no successful UK internet companies of any scale. We're hugely successful at content production and format development, but ITV is the last remaining major UK owned and backed producer. So what do we do with the BBC ? Surely it is time to redefine it as an organisation rather than just chipping away, piece by piece.
bbc budgtets costs cuts