The Blind Fighting The Blind 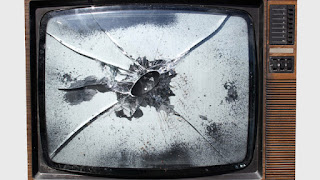 And so it came to pass, that the evil giant, Google, brought upon it the wrath of the television industry...

They did this by suggesting that YouTube drives more sales than broadcast TV after commissioning some research (and we all know how accurate research is..)

That's somewhat disingenuous. Of course a medium with a clickable response is theoretically both more measurable and is likely to generate more direct sales response than one which is far more subliminal and subtle (why is it that everyone blindly accepts Google metrics ?).

Video is emotional, and so is ideal for building brands on broadcast TV. The cluttered, messy environment of Google is not a good place to build brands.

In trying to variously be a user generated video platform and broadcaster, YouTube has taken a decade to find its feet at a massive cost. Netflix has come much further much more quickly by being less arrogant and more focused.

The reality is that YouTube is several businesses rolled into one. It's trying to be a social platform, an online video platform, a broadcaster, a pay per view system and a video advertising platform, plus much else beyond.

It took nearly a decade to move away from an emphasis on point and click short form content and still isn't sure what it's really doing. Except for everything.

It's not surprising that broadcasters with their tight, well defined decades old business model look on with disdain. YouTube is a cuckoo in the nest.

However, Google is right that YouTube is probably under sampled against traditional TV, especially outside the UK. TV provides very abstracted viewing figures based on very small samples, so it's difficult to gauge real accuracy. Also, engagement with traditional TV seems is likely to be much lower (putting the kettle on, going to the toilet, chatting, as opposed to a personal interaction with a PC or mobile screen).

But the TV companies are also being disingenuous. They have been slow and conservative beyond belief in their approach to an online strategy. The best they have managed is simulcasting and in demand with endless ads. Oh, just like their broadcast properties! You really can't teach an old dog new tricks.

In the meantime a massive gap has appeared between what the traditional broadcast channels are doing and what YouTube is doing. Netflix, Amazon and Hulu are exploiting it, and there's room for plenty of others.

In my view the ideal TV business model of the future is in using YouTube and broadcast TV as an audience building platform - the former using a teaser channel and the latter using programme brands, and then running your own show with native ads and sponsored content (you can also throw SATVOD (subscription/advertising/transactional video in demand) into the mix).

If you can do this, my fellow broadcast professional, you will live happily ever after and banish the nightmare of TV commissioners and YouTube profitability alike.