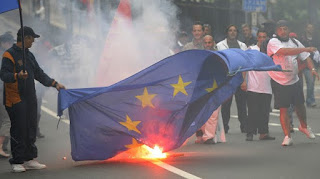 Just as you were thinking that leaving the EU was a bad idea, they come up with GDPR, a new 'data protection' directive that beggars belief.  Essentially, it's that cookie warning rubbish taken to the nth degree.

I believe that the idea was to stop US Big Internet from stealing Europeans' data. A commendable objective. The reality is totally different. As usual, when you get a bunch of utter morons with no understanding of technology coming up with consensus dogma, it's an utter mess.

The legislation is aimed at companies using consumer data, giving them the right to 'own' their data (something I have long advocated via the 'mybot' concept), but it has had dreadful consequences which potentially could render the internet in Europe unusable if the law was applied to its letter.

As ever with this type of badly drafted law, there is no clarity on how it should impact unforseen areas like, er... a workplace, or companies offering business to business services.

Meanwhile, consultants are rubbing their hands with glee, taking sharp intakes of breath at every opportunity whilst watching the $$$ signs roll in their eyeballs whilst lawyers are pouring another glass of burgundy in sweet anticipation of the riches this will bring them. A whole new class of litigation!

I have personally utterly ignored the cookie directive, happy to go to court to prove how totally stupid it is if necessary.

However, GDPR has had a far more profound impact on my businesses.

It has resulted in our biggest clients (and we work for many of the world's largest and most successful companies) issuing stupid audits, directives and contracts. No doubt encouraged by the parasitical industry that surrounds such stupid legislation.

We have had to redraft every document we use, from employment contracts to acceptable user policies; we have run training; we are still awaiting compliance from suppliers such as Microsoft (we had one client, one of the world's biggest brands, based in the EU, who required written sign off on their GDPR policies from every supplier. Try getting that from the likes of Microsoft...)

I remember Y2K audits, which invoked a similar level of hysteria in corporate land, stoked by fear and ignorance.

And that, dear reader, is what we get from Brussels.

I know that Google has shrugged its shoulders at this legislation, whilst I am scambling. Is that what the lawmakers in the EU intended - to handicap successful, global EU companies in favour of Big Internet ?

Once again, it's a massive argument for leaving the idiotic EU bureaucracy.