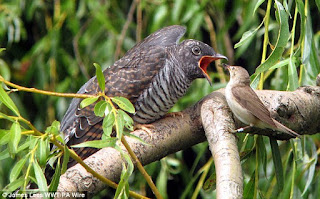 There is nothing I loathe more than those who take advantage of the largesse and kindness of innovators and use and manipulate this for their own benefit. Who knows what Sir Tim Berners Lee thinks of the dreadful Mark Zuckerberg, the ultimate cuckoo in the world wide web?

But there are plenty of other examples of exploiting the benevolence of innovators such as ‘branching’ open source software. Rocket Internet is famous as a clone factory raping open source projects, and video platform company Kaltura took open source software to kick start their business. And that is without looking at what legally sanctioned US and Chinese companies are doing with the knowing support of their governments.

Of course, there is a thin line between providing support for open source and cuckooing open source code. After all, major successful initiatives such as Linux were bolstered by the existence of fully commercial companies such as Red Hat.

But this commercial deviousness can take many forms, such as those who give with one hand and take away with the other. Yes, Big Internet, j’accuse!

Google recently received a record fine from the EU for monopolistic behaviour around Android (so why has Apple not been fined even more for a far more insidious and long standing ‘walled garden’ approach to OS distribution ?), but in my view this is the least concerning aspect of their behaviour.

The way they open sourced Android to gain market share and then started to close the code base was cynical at best - yet the fine is for forced bundling of their apps. (Microsoft has received swingeing fines for similar behaviour in the past.)

So, when they keep on trying to push ‘open source’ video codecs such as Ogg Theora, VP9 and AV1 which they have a substantial amount of control over, I get concerned. They also seem to heavily influence the HTML “video” tag and have been machinating behind various ‘open’ DRM initiatives.

This is just typical of the approach of Big Internet, where, under the flag of freedom, they use their dreadful benevolence to create a world of digital serfs, both in their robotic workforces (“Oh dear, I campaigned for Hilary at night, but ended up getting Trump elected in my day job. Oh no, what shall I do? Hell, I will wring my fingers, self loathe at the Tiki bar until the second mojito and then swear at the unemployed scroungers bedevilling my exclusive Bay area neighbourhood as I take the corporate bus home through the communities which my company makes huge efforts to avoid paying any taxes to maintain.” - apologies for the cameo, but it makes my point.)