The Studio System Lives On 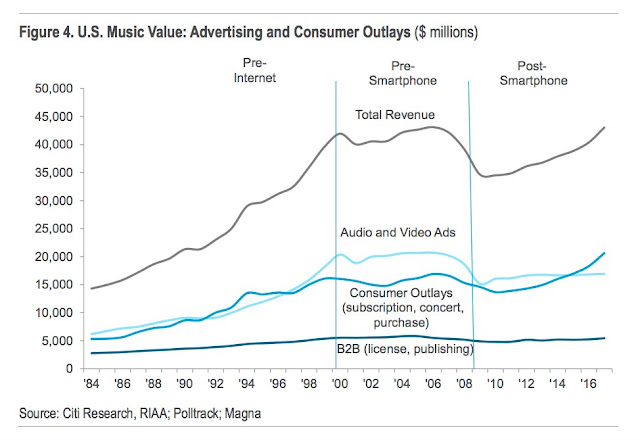 But the graph does not show that just 12% of the revenue mapped filters down to musicians (although the amount that is also paid in publishing rights to composers is somewhat obfuscated).

Once upon a time, a long time ago, when there were still 'pluggers' and 'promoters' I ran a small music publishing and record company and I can truly believe the fraction quoted. Citi seems to think that this has gone up, which does not surprise me - I once signed over a band to MCA on a 7% cut that weas considered generous in the 80s.

When you see this, it makes so much sense to become Stock Aitken Waterman or Netflix - studios owning and controlling its own properties. It is why Chaplin, Fairbanks, DW Griffith and Pickford set up United Artists in the early days of Hollywood to control their output and interests.

Maker Studios became the first great YouTube aggregator and was quickly snapped up by Disney.

Many have mooted blockchain as a way of disrupting this, but life seems to need its intermediaries. Woolworths and Sears have become Amazon.

Being an intermediary - or wholesaler - online is a great gig with all the protection that the DCMA provides.

And this is where Apple missed a trick. They failed to vertically integrate, seeing themselves as a distribution platform (or, arguably, monopoly). Meanwhile Spotify and Netflix stole their advantage. And also, arguably, are much better for artists. YouTube has a similar predicament and is belatedly trying to turn itself into a studio without becoming a studio, since that would bring regulation, and Google has made a virtue of making a lot of money by exploiting asymetry in regulations and taxation.

And as traditional 'placement' advertising dies, brands will need to become studios too (great news for our RIghts Tracker division which is already working with companies such as Red Bull and agencies such as WPP).

Nothing really changes. But maybe we can get 15% to those musicians by 2025 unless Big Music is taken over by Big Internet....