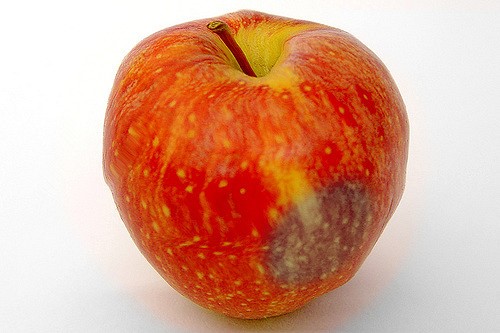 I was a very early adopter of Apple products and have always been a fan - as long as Steve Jobs was at the helm.

Under all other leaders, including Scully and Cook, things just get mediocre. As Steve Ballmer proved at Microsoft, you can ride on the coat tails of genius for quite some time.

Apple charge nearly twice the going rate for their products and tie consumers into a walled garden of products and services, a model that has served them well for a long time. But things have changed.

What do they need to do ?

Apple no longer have the kudos to maintain their quasi-cult status. They need to deconstruct the walled garden they have built, as Microsoft has done, and embrace a wider ecosystem.

Launch truly innovative products - or even acquire them - Tesla would be an obvious way to use the massive cash pile the company has, or Netflix.

Build a realistic content strategy - iTunes is dying and Apple TV has had several false dawns. Again, Netflix ? Entering this market now is too expensive since all the basic subscribers have had their subs scooped up and the pisspoor iTunes (did you ever try to use this lousy software ?) is actually a disadvantage.

Software: finally find some people that can design UIs - the Mac UI is frustrating and iTunes remains an Achilles’ heel.

Develop a cloud strategy and offering - otherwise Amazon and Microsoft, and even Google, will always be able to get to market quicker and cheaper. It’s probably too late for this.

Improve your products: Siri is so bad I never use it, whereas I use Alexa and OK Google daily; the cameras on iPhones are risible beside the Pixel 3; battery life remains dreadful; spell correction on iPhones is bonkers - why do people’s names get CAPITALISED ?

AI - sack your AI team and find a new one to fix the above and take the company forward. As with cloud (see below), it’s probably too late.

Build a realistic global strategy with products that slot into the African, Indian and Chinese markets better than the current products (ie an entry level range).

Stop price gouging - launching an entry level range at the price of the previous gen of phones and then an even more expensive range for idiots willing to pay over the odds is just cynical and, as it has turned out, stupid.

Relocate - it’s clear that the policies of the demented US Presidential incumbent has had a massive effect on Apple. In Europe companies move their HQs if presented with such conditions. Apple, perhaps, should move to their Irish or Bermudan tax havens away from the vissicitudes of a madman.

Stop focusing on edifices - what is it with these ultra campuses, the “Infinite Downward Loop” - especially in a part of the world where Apple refuses to pay local tax and actively lobby against improved public transport. These are BAD GUYS that shit on their own doorstep. That almost always comes back to bite you.

Steve Jobs built Apple as a cult not a brand, but even its loyalest acolytes are buying better devices from competitors at significantly lower prices. Consumerism is a dreadful religion to compete against. ​

Without major, bold moves, there is no way they are coming back from this. Empires fade or implode. We are merely spectators.
apple downturn issues problems stock price