May 01, 2019
I'm delighted to announce that I have joined E-learning Studios as Chair and Interim CTO.

Frankly, I was never a fan of VR, but when I saw ELS' work it blew me away. With my background in both education and technology it is a brilliant medium for teaching, educating and learning. AR has veen more exciting possibilities. 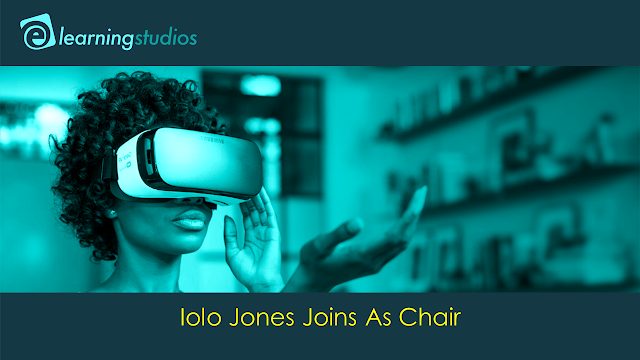 Here is the official release:

The company works with corporations and organisations including the BBC, Deloitte, Close Brothers, Ericsson, Hitachi, Roche, GSK, IIS, Aston University, the FT and British Gas, and has developed its own range of customisable courses as well as a cloud based delivery platform for VR and AR.

Most recently the company was awarded an Innovate UK grant to integrate AI into its delivery, with the objective of generating interactive characters to participate in VR and AR training sessions.
Iolo Jones has founded a number of companies, including Sutton Jones Mutlimedia (sold to Mediaedge CIA, now part of WPP plc), leading system integrator Interactive 1, online video pioneer Narrowstep (which went public on the the NASDAQ OTC market before being acquired) and was most recently Chair of rights management cloud specialists, Rights Tracker. Iolo has degrees in Radio, Film & TV and Educational Broadcasting and sat on the Course Board at film & TV college Ravensbourne for nearly a decade.

“The possibilities for deploying VR and AR within training and education is immense,” commented Jones. “The real trick is being able to take employees into situations that would be impossible for them to enter in real life – from public speaking in a massive conference hall to fire training in a commercial kitchen and safety training in the nuclear industry.

“ELS have a great team with the best client list in the industry. My job will be to help them grow rapidly in a nascent market.”

Before joining as Chair, Jones worked as a consultant with ELS helping them expand their cloud platform and productising their existing VR applications.

“It’s been great having Iolo on board,” comments ELS CEO and founder Nitin Thakrar. “He’s helped us understand the possibilities for where we can take the business and complemented our existing team.”